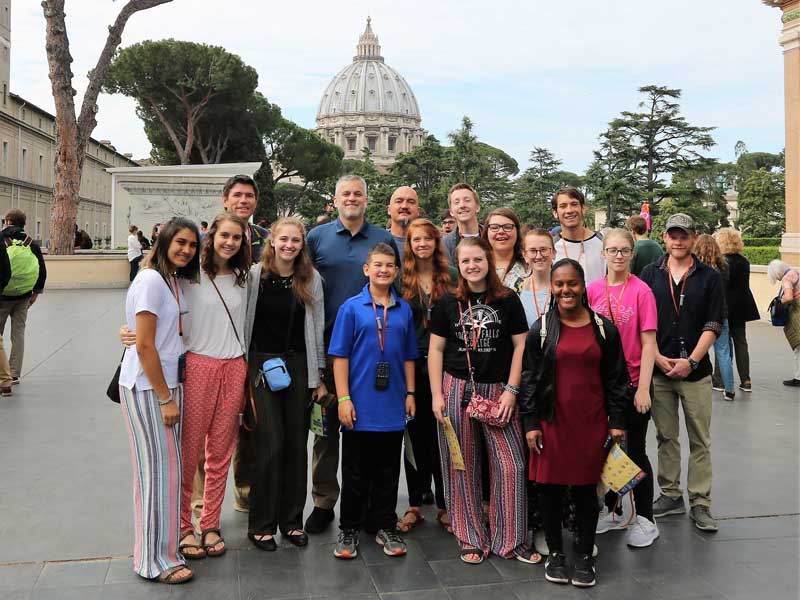 Toccoa Falls College students traveled to Greece and Italy this summer in pursuit of the roots of early Christianity and the foundation for Western Thought and Culture.

Fourteen students, three professors, and one alumnus trekked in the footsteps of the Apostle Paul through Athens, Cenchreae, and Corinth as they visited ancient Greek cities where his ministry took hold. Their journey ended in Rome at the imprisonment, execution, and burial sites of the apostle where his own journey on earth finished. From Paul’s disputes with Greek philosophers to his dialogues with Roman synagogue leaders, the students discovered the locations where the New Testament writer lived, wrote, and advanced the message of the gospel.

Meanwhile, they explored the foundations of the church as it assimilated the Greek and Roman cultures to create Christian-centered art, sculpture, architecture, and churches. The Western Thought and Culture class travelled to Rome, Florence, Pisa, and Siena in Italy to investigate how the early, medieval, and Renaissance church expressed the Christian faith. The art of Michelangelo, Raphael, and Bernini combined with the cross-shaped basilicas to illustrate how the church shaped culture in both the East and the West.

Dr. Brian Shelton described the trip: “This classroom has been a fantastic learning experience for TFC students. Seeing first-hand the classic art and significant locations that appear in textbooks provides a rich and invigorating encounter for understanding the history and influence of the church. Walking in the catacombs, standing atop Mars Hill, gazing on Moses carved from marble, and standing under a 400-foot church dome inspire reflection on God’s work in the world over the centuries.”

Among the travelers was full-time online student Anita Leverett. She remarked: “The last couple of weeks have really helped to solidify my confidence in the fact that I was always right where I needed to be. It seems like this trip was a chance to experience the things I was most worried about missing out on [as an online student], but even more fully than I could have otherwise.”

To learn more about the Study Abroad Program at Toccoa Falls College, visit our opportunities at https://tfc.edu/academics/study-abroad/