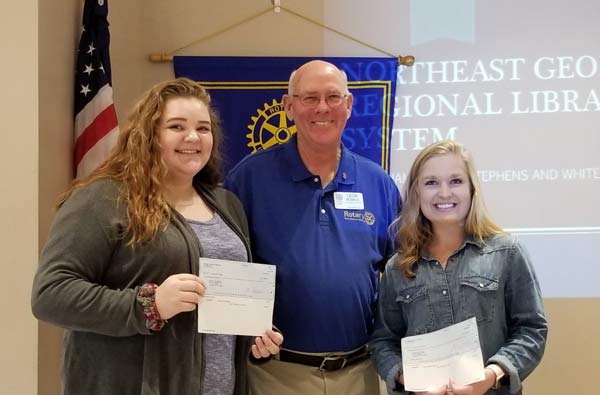 On Tuesday, October 29th, the Toccoa Rotary Club honored two Toccoa Falls College students with $1,000 scholarships.  According to Rotary President, Leon Womack, this is the fourth year the “Service Above Self” scholarship has been awarded locally.  The money is gained through a grant from Rotary International and then distributed locally to deserving students.  This is the first time students from Toccoa Falls College have been selected for the scholarship.

The “Service Above Self” scholarship is awarded to a student who is outstanding academically, as well as committed to serving others in their community.  Two such individuals from Toccoa Falls College were selected by the Rotary Club this year.  The first recipient was Elizabeth Dunnavan, a sophomore majoring in Early Childhood Education. Elizabeth is the daughter of Darren and Joanne Dunnavan of Toccoa.

The second recipient was Carley Payne, a junior majoring in Nursing. Carley is the daughter of Tracy Payne and Nan Payne of the Stephens County area.