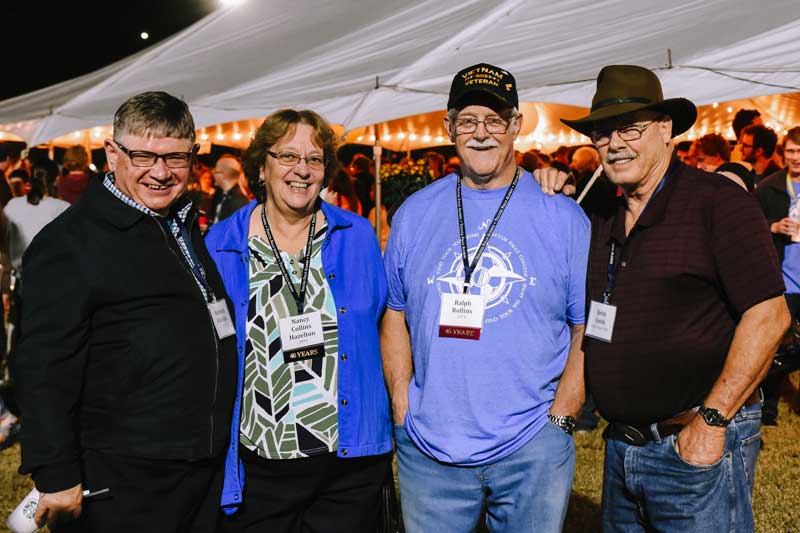 Friday morning began with an Alumni Golf Tournament played at The Links at Lake Toccoa where over 20 participants enjoyed the cool morning weather and golfing event. Coming in first place this year was the father-son team of Earl Hotalen (1982) and Jameson Hotalen (2006).

The evening festivities began with a Tailgate Picnic just before the Men’s Soccer Game. Under the direction of Dr. Tom Council, the combined college and reunion choir opened the game with the singing of The National Anthem.  Next, Athletic Director Kevin Hall and President, Dr. Bob Myers recognized and thanked Doug Hitchon and ASI Industries of Toccoa for their generous contribution to Toccoa Falls College and named the soccer press box in honor of the ASI Group. The press box allows for announcing and live streaming of TFC soccer games. The TFC Screaming Eagles went on to defeat Mid-Atlantic Christian University with a final score of 4-0.

A hymn sing and bonfire followed the game, which was followed by everyone’s favorite event, Sweets & Treats. This event features a full canopy tent filled with various booths filled with tasty treats for every pallet. Ice cream floats, kettle corn, donuts, cookies, candy, fried Oreos, and more!  This year included a Kona Ice truck and egg rolls from the Hmong Student Association. Both of the new additions were a hit!

Saturday morning’s Alumni breakfast recognized reunion classes ending in “4” and “9”. Attendance included graduates from 16 states and seven decades. The earliest class represented was from the former Toccoa Falls High School Class of 1954, celebrating 65 years since receiving their diplomas! TFC was excited to have a great turnout from the newest members of the Alumni Association, some of our most recent graduates from the Class of 2019!

Alumni from the former Toccoa Falls High School held a reunion luncheon in Gate Cottage. For several of those students, this was the first time they had been back since graduation. One of the highlights of their reunion is the open mic time to reminisce about their high school years.

The afternoon continued with an Alumni Soccer Game containing 25 former soccer players, as well as an Alumni-Faculty/Staff Softball game, in which the Alumni claimed the win. Current students also joined alumni families for a hike to Little Falls, where children completed a scavenger hunt along the way.

The evening brought the Festival on the Field, a gathering of alumni and families for a delicious BBQ dinner from Just Right Catering in Toccoa. Guests were entertained with lawn games and inflatables, followed by after-dinner entertainment by the TFC Jazz Band, under the direction of Yurii Henriques.

This year’s Homecoming Queen was crowned during halftime of the Alumni vs. Student basketball game. This year’s queen was Miss Sondra Hoskins, a senior in the Ministry Leadership Department.

Alumni wrapped up the weekend by heading to Gate Cottage for Coffee at the Falls. There they enjoyed desserts and drinks while hearing acoustic guitar selections by Kayla Beggs (2019). Those in attendance had the unique opportunity to see Toccoa Falls at night in lights.

Commenting on the weekend events, Director for Alumni Relations, Deborah Wilkes (1995) stated, “This year’s Homecoming theme was ‘Find your way home.’ I was excited to see that hundreds of alumni did just that. It was encouraging to see those who were attending Homecoming for the first time and are already making plans for next year. I love seeing our second and third-generation graduates in attendance along with their families. Thank you for making Homecoming weekend a success!”

Enjoy the sights from Homecoming 2019 by viewing the gallery below!