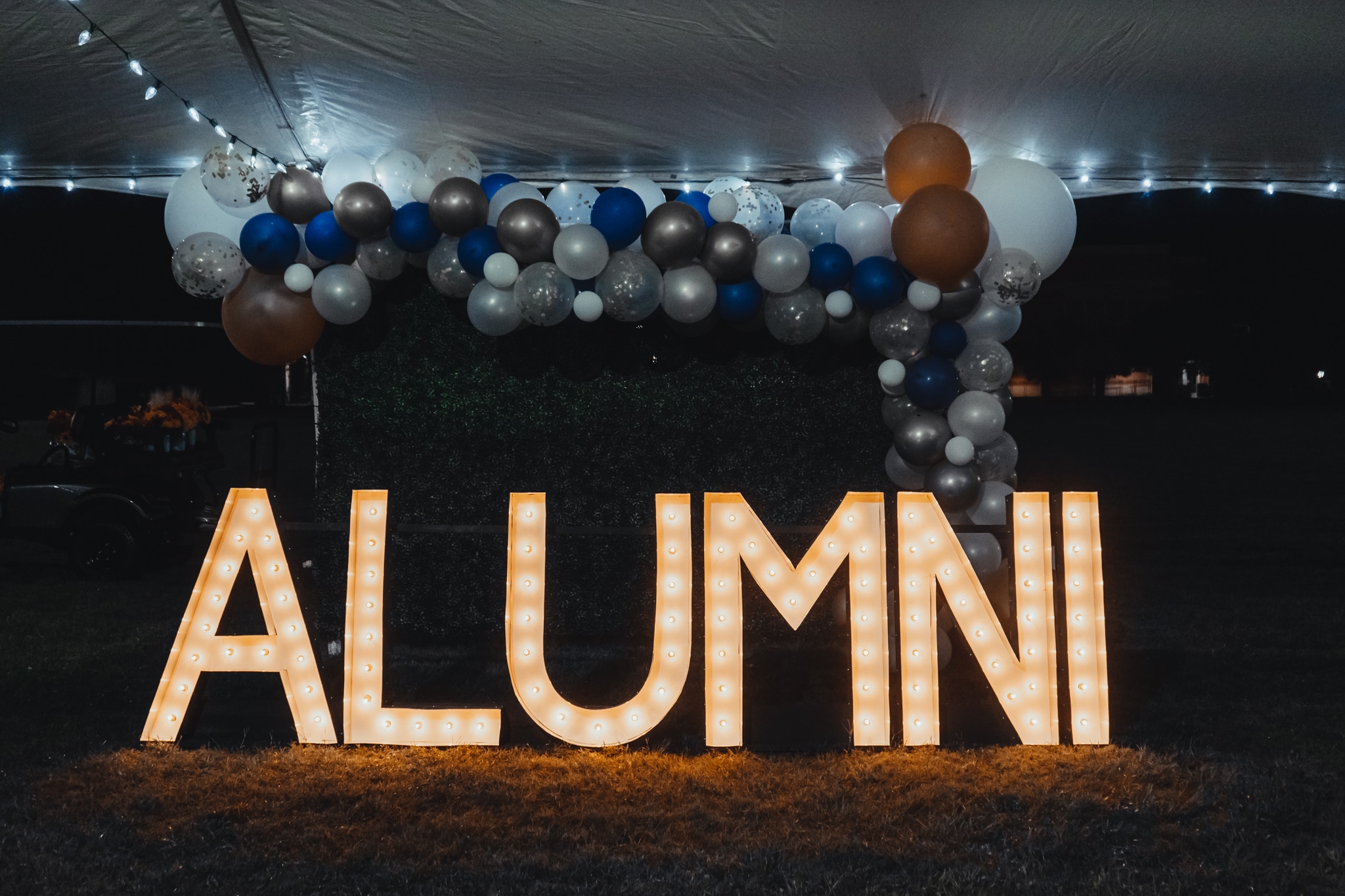 We were excited to welcome alumni back to campus for Homecoming weekend. There were over 350 registered guests in attendance that included 45 families who were back for the first time since graduation! We had graduates in attendance representing the last nine decades with 1947 being the earliest reunion year present. Alumni traveled back to campus from 25 states.

The Homecoming golf tournament was held at The Links at Lake Toccoa. First place was the father/son duo of Earl (1982) and Jamison (2006) Hotalen. Second place went to the pastors from First Alliance Church Toccoa, Brian Rockwell (1994) and Terry Brown (1996). The third place team was Adam Gragg (2006) and Aron Hotalen.

Even though varsity soccer games were cancelled due to rain-soaked fields, students joined with alumni for a cookout under the large tent on Friday night. Following dinner, Professor Grant Wall led a hymn sing in the lobby of Grace Alford Performing Arts Center. Friday evening ended with one of the favorite events of the weekend, Sweets & Treats. Candy, kettle corn, cookies, and Kona Ice were among the selections at the tent. Special thanks to our friends at Jaemor Farms for providing boiled peanuts for those who wanted a savory treat instead of sweets.

The Homecoming 5K started the day on Saturday. Runners and walkers made their way around campus and returned to Gate Cottage for the finish line. The top three finishers were Josiah Hopkins, Dr. Gunther Juncker (Professor of New Testament and Greek), and Joshua Lillie (2016)

During the Saturday morning Alumni Breakfast, reunions were celebrated for twice as many classes after having a virtual format last year. Summer interns from the Student Missions Fellowship served as waitstaff for the guests in attendance. Joshua Lillie (2016), president of the alumni board, presented the $1,000 Toccoa Falls Alumni Association Scholarship to Senior Joshua Bingham.

Following breakfast, we had the dedication and ribbon cutting for The John V. Savio Disc Golf Course, a 12-hole course on the lower part of campus. John’s family, college friends, alumni, and donors were in attendance. Dr. Bob Myers and John B. Savio, John and Jeannine’s son, unveiled the marker for the course. John B. was presented a commemorative disc to throw for the newly named course. Following a prayer of dedication by Rev. Ron Schafer (1979), family members joined Dr. Myers and John Allen, chairman of the Board, for the ribbon cutting. Lunch was provided for the Savio family by Brother John’s Subs, the restaurant that was started by John when they lived in Toccoa.

The duck race continues to be one of the most popular Homecoming traditions. The three fastest ducks won prizes for Travis Graham (2011), David Reese (1994), and Jane Duncan (1969).

Scott and Lori Davis brought goats from The Lawson Center to join the family fun at Festival on the Field. Children enjoyed petting the goats and leading them around the field with the leash. A delicious BBQ meal was served prior to the start of the Alumni Basketball game. Thank you to all the former players who came back this year! During halftime of the game, Kea Miles was crowned the Homecoming Queen and Tim Heath was crowned as the Homecoming King.

The weekend wrapped up at Gate Cottage with Coffee at the Falls. Kayla Beggs (2019) played acoustic guitar selections as alumni enjoyed a sweet treat. Alumni walked the path or rode in a golf cart to see the beautiful Toccoa Falls in lights.

Thank you to the Alumni Office workers and countless volunteers who kept things going throughout the weekend! And a special thanks to our Maintenance Department for their many hours of work behind the scenes!

Save the date for Homecoming 2022 and make plans to join us on October 7-8.