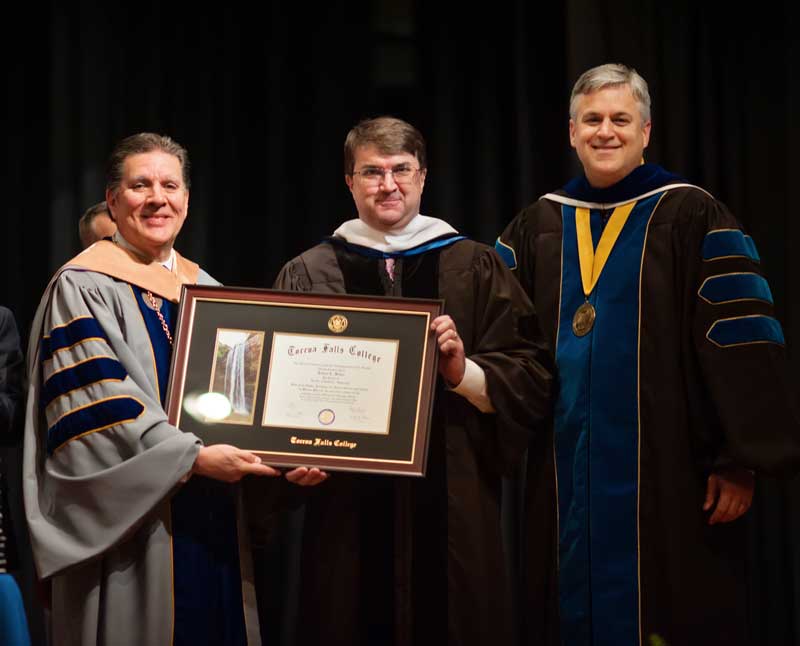 Nothing quite compares to the excitement that can be felt this time of year as students around the country experience their college graduation. Years of hard work and dedication culminate in photos of smiling faces while family and friends look on with pride and happiness.

On Saturday, May 18th, excitement filled the air as everyone prepared for the Toccoa Falls College Commencement Ceremony.  Record crowds filled the Grace Chapel and Performing Arts Theater to honor the 2019 graduating class.

During the ceremony, Dr. Bob Myers, President of Toccoa Falls College, presented Stephens County Sheriff Randy Shirley with the President’s Medallion Award for selfless service to the kingdom of God, community and the College.

This year’s commencement speaker was the Honorable Robert L. Wilkie, Secretary of Veteran Affairs. Dr. Myers and Provost, Dr. Brian Shelton, presented Wilkie with an honorary degree of Doctorate of Letters in recognition of his service to our country and our veterans.  Wilkie addressed the crowd and encouraged graduates to take the time to thank those who had helped them along the way. He also spoke on the obligation of service to the United States of America and the duties of being a citizen. Lastly, Wilkie spoke on the importance of truth, compassion, sacrifice, and the role faith has played in the lives of the students while attending TFC.

After the presentation of degrees, Dr. Bob Myers spoke to the students and reminded them always to remember the TFC motto, “Developing Godly character with intellect,” and never to stop developing character or intellect.  He challenged them with “Today matters” and to remember every choice matters because every day matters.

Installation of the 2019 graduation class was provided by Jason E. Franklin, LTC, United States Army and President of the Alumni Association. The ceremony concluded following the prayer of dedication and benediction.

View a recorded version of the 2019 Commencement Ceremony.