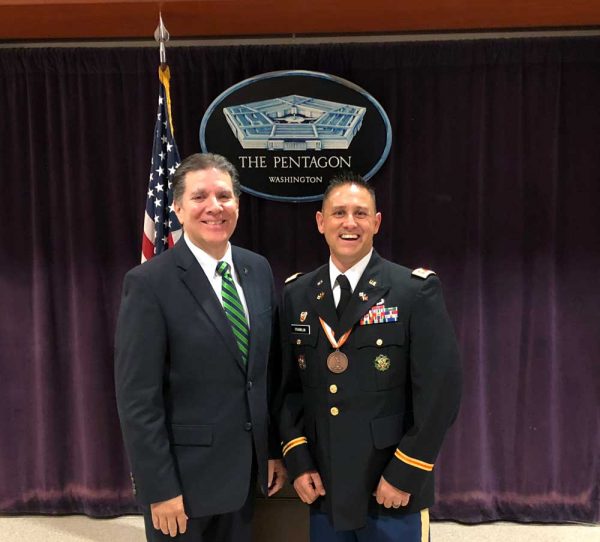 On June 15th, Toccoa Falls College Alumni Major Jason E. Franklin, was promoted to Lieutenant Colonel during a ceremony held at the Pentagon in Washington, D.C.  The ceremony was attended by TFC President Dr. Bob Myers who gave the invocation during the ceremony and Alumni Director, Deborah Wilkes.  The benediction was performed by another TFC alum, Navy Commander Paul N. Rumery.

Major Jason E. Franklin enlisted into the Army National Guard at the ripe age of seventeen.  After his Basic and Advanced Individual Training he served as a Subscriber/Switchboard Programmer  in the Indiana National Guard and later transitioned to the US Army Reserve.

After college he was accepted into the Army’s Officer Candidate School (OCS) and earned a commission into the US Army Signal Corps. His first duty assignment was the 101st Airborne Division at Fort Campbell, KY. There he served as the Information Technology Officer for an Attack  Aviation Battalion with follow-on assignments as Platoon Leader and Company Executive Officer. During this time as a Platoon Leader, he deployed his platoon to Kosovo (2001). Wanting to spend more time with his wife, Amy and son, Cameron, he chose to separate from Active Duty..

Upon separation from Active Duty, he joined-the Indiana National Guard again where he served as the Deputy Commander for Operation Noble Eagle and commanded C Company / 38th Signal Battalion (INARNG). This re-kindled his love for serving his country leading him to transition to the Title 10 Active Guard / Reserve program (AGR) with the Army National Guard. He spent his entire time as Major in the ARNG AGR program. His duties included Operations Officer (S3) at Fort Irwin, CA; Signal Organizational Integrator (OI), Force Management Division; Operations Officer for US Forces Afghanistan; Battalion Executive Officer, –at Fort Leavenworth (MTC-LVN); Deputy Division Chief, of Strategic Plans and Policy (FORSCOM); Chief, Information Management/Systems branch (NGB J6).  It was here that he credits God’s hand of Sovereignty for the opportunity to transition to the US Army Reserve (USAR) where he currently serves.  LTC Franklin is the Chief for the Strategic Plans and Policy branch of the Army’s Protection Division (G-34).

His civilian education includes attendance at Toccoa Falls College where he earned his Bachelor of Arts degree in Bible and Theology. He also holds a Master’s Degree in Business Administration from Webster University.

His junior year at TFC, he met Amy Wittgreve. And if you haven’t heard the story of how they met, you should ask him at the next homecoming! He finally won her affection and they have now been married for over 21 years!, Amy, whom he affectionately refers to as “Mrs. America” homeschools and together, they raise their seven children: Cameron (17), Charise (15), Topher (6), Gracie (4), Caleb (4), Caroline (4), and Mercy (3).

Jason loves TFC and gives credit to his alma mater for the foundation that laid the way for his present day success. One way he gives back is by  serving as the TFC Alumni Association President.