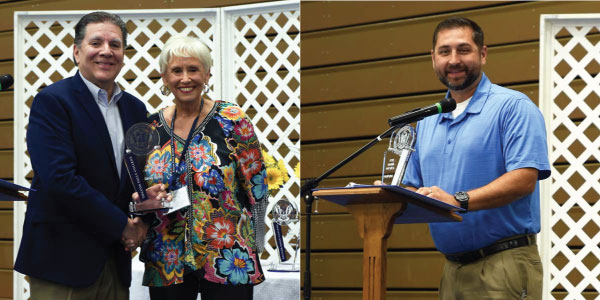 Over 300 registered guests, faculty, staff, students, and other visitors attended this year’s homecoming held October 11th-12th. Beautiful weather abounded, and everyone enjoyed a variety of activities, including soccer, softball, picnics, sweets & treats, duck races, bonfires, and more.  The success of the event was evident by the smiling faces seen all around campus.  Many old friends gathered together to reminisce about their time at TFC and make wonderful new memories for today.

Part of the weekend celebration included the Alumni Breakfast on Saturday in which the Alumnus and Alumna of the Year were recognized with an award.  This year’s Alumnus of the Year went to Colonel Andy Myers of the Stephens County Sheriff’s Office.  Colonel Myers is a recent (2017) graduate of TFC in Organizational Leadership. Andy has worked in law enforcement for 20 years serving as patrol officer, narcotics investigator, SWAT team member, and general investigator. For the past ten years, he has worked with the Stephens County Sheriff’s office, where he serves as Chief Deputy. Andy states he is most proud of his ministry accomplishment in the development of what he calls the “Missing Ministry Program.” Through this program, he has a chance to help local churches assess their security needs and implement policy and practice to ensure the safety of their congregants.

Andy and his wife, Brittany, have been married for fourteen years and have two sons, Will and Henry. They are active members of Royston Baptist Church where Andy currently serves as head of the Security Committee and Vice-Chair of Deacons.

This year’s Alumna of the Year went to Carole Shust. Carole is a 1973 graduate of TFC with a degree in Cross-Cultural Ministries. She and her husband, Dan, lived in Illinois and Pennsylvania before returning to Toccoa in 2004. After returning, Carole spent the first nine years leading Barnabas groups on the TFC campus as well as mentoring students. In 2011, she wrote and published a study book entitled “Kings of Judah: A Lamp Maintained,” the result of a personal 6-year intense study of 2 Chronicles.

In 2015, Carole was invited to join the Stephens County jail ministry team and in 2016 was named Volunteer of the Year. She began to meet with inmates individually, then developed a weekly ministry with smaller groups, doing more intense Bible studies. She has recently begun a Wednesday night Bible study for female inmates who have found the Lord and upon being released, want to continue Bible study. She regularly corresponds with those who have gone from jail to prison or substance abuse treatment centers, for prayer and encouragement.

Carole and her husband, Dan, have two sons, Aaron and Nick, and five grandchildren.