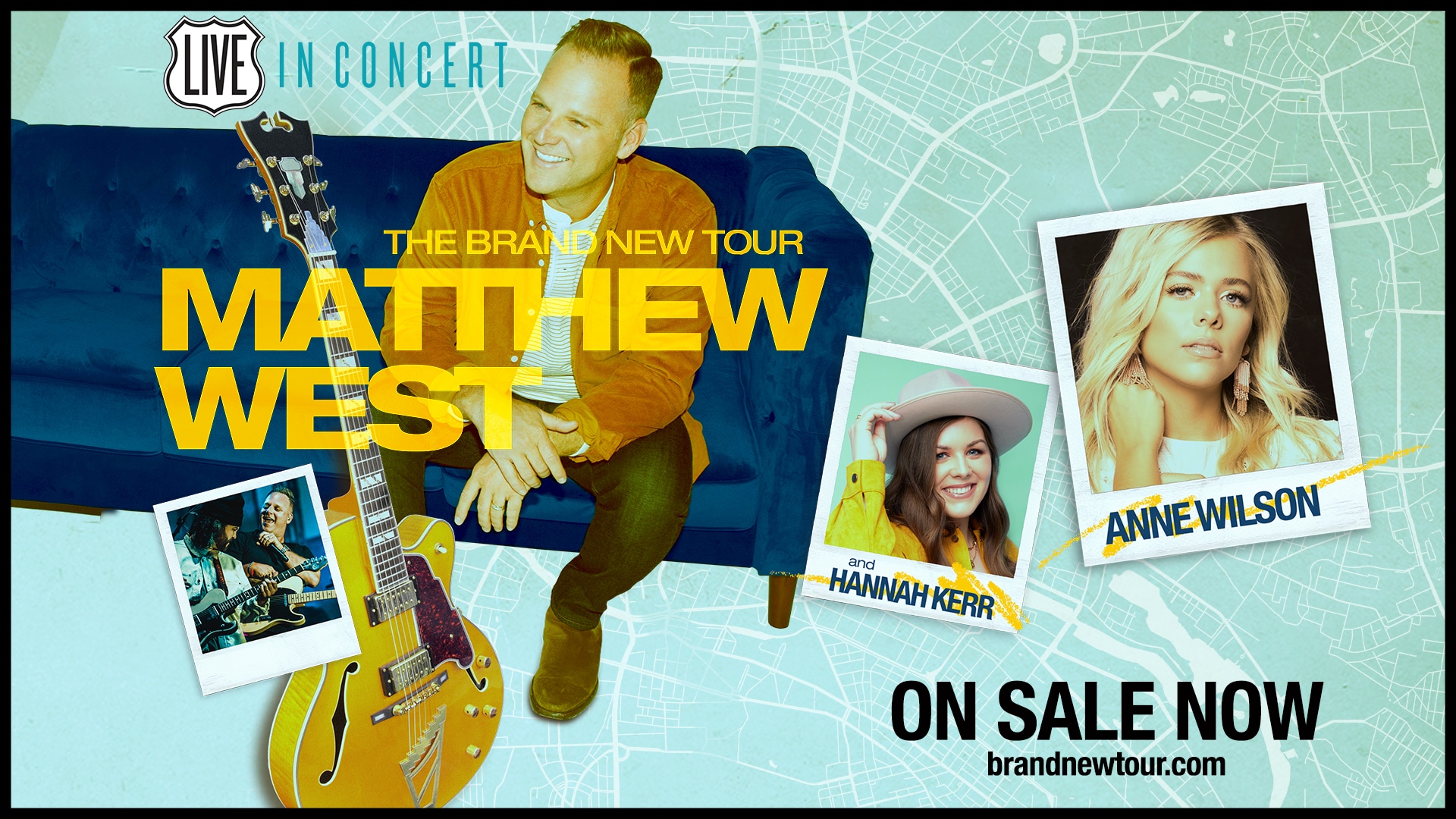 “I am so excited to hit the road this spring on The Brand New Tour with an awesome lineup of talented artists and friends,” said Matthew West. “After the disappointment of COVID concert cancellations and postponements, I’m feeling like a kid again. I can’t believe I get to do what I do for a living, getting on a tour bus and playing live music for people. It all feels brand new again and I can’t wait! Most importantly though, this world has been through a hard season like I’ve never witnessed. I’m praying that each night on this tour will be a powerful reminder for all who attend that we serve a God who promises to do a new thing! It’s a brand new year, a brand new beginning and a brand new tour! Let’s go!”

Matthew West is a five-time GRAMMY® nominee, a multiple ASCAP Christian Music Songwriter/Artist of the Year winner and a 2018 Dove Award Songwriter of the Year (Artist) recipient. He has received an American Music Award, a Billboard Music Award, a K-LOVE Fan Award and named Billboard’s Hot Christian Songwriter of the Year. A recipient of the Rich Mullins Impact Award, West also received a Primetime Emmy® Award nomination for Original Music & Lyrics for the title track for the feature film “The Heart of Christmas.” He has been awarded a RIAA Gold certification for his single “Hello, My Name Is” and RIAA Platinum certification for the song “The Motions.” Adding author to his list of accolades, West has written five books to date: Give This Christmas Away, The Story of Your Life, Forgiveness, Today Is Day One and his latest, Hello, My Name Is. He is also passionate about providing hope and healing through the power of prayer and story. Along with his father, Pastor Joe West, they founded popwe, a non-profit ministry helping others to craft, share and live a more meaningful life.

This tour brings along one of the hottest new artists in Christian music as an opening act. Anne Wilson released her breakout debut single “My Jesus” earlier this year, which reached number one on Billboard’s Hot Christian Songs chart while her debut album of the same name reached number twelve on the Top Christian Albums Chart.

Singer/songwriter Anne Wilson knows the healing power of music firsthand. The lyrics of Hillsong Worship’s “What A Beautiful Name” became a lifeline for the Lexington, Kentucky native after her brother was tragically killed in a car accident at the age of 23. Although she spent much of her childhood behind a piano, Wilson sang in front of an audience for the first time at her brother’s funeral. It was in that moment that she realized what she was born to do. A video of her moving performance organically circulated, eventually landing her a record deal. With a mesmerizing voice and a visible hunger for Jesus, the 19-year-old relies on personal journal entries and time spent in nature for songwriting inspiration. Her rootsy sound reflects her strong southern upbringing and her admiration for country royalty like Johnny Cash and Dolly Parton married with the heart-on-your-sleeve transparency of Steffany Gretzinger and Lauren Daigle. Wilson’s introductory track, “My Jesus”—which she co-wrote with Jeff Pardo and Matthew West—is a warm invitation to experience her Savior in the same intimate way she knows Him. She’s currently working on a debut three-track single—also titled My Jesus—for Capitol Christian Music Group.

“This February, I am honored to be able to hit the road with my good friend Matthew West for the Brand New Tour,” said Anne Wilson. “We are excited to bring a great show, a great message and a great time lifting up Jesus together to so many cities around the country!”

Also joining Matthew and Anne at Toccoa Falls is Hannah Kerr, a singer/songwriter whose 2021 release “Same God” has reached over 2,000,000 streams on Spotify. The Brand New Tour will visit Toccoa Falls College on February 8th, 2022 and will make stops in Dallas, Columbus, Detroit and more before wrapping on May 7th in Lexington, KY. For a full list of dates and cities, or to order tickets, visit brandnewtour.com.