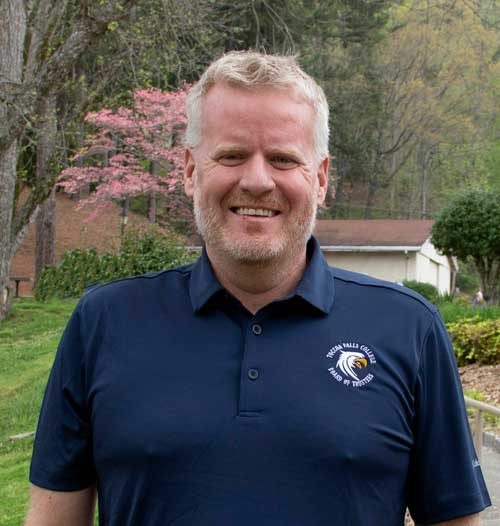 Toccoa Falls College recently welcomed Dr. Edwin Mangham as the newest member to its Board of Trustees. Ed was born and raised in the home of Christian and Missionary Alliance ministry parents, both TFC graduates. Receiving his call to ministry as a boy, Ed attended and graduated from Toccoa Falls College in 1993 with a BS in Missions and Church Planting, and Columbia Biblical Seminary in 1995 with an MA in Intercultural Studies, before entering full-time ministry in 1996.

Ed and his wife Julie served in church ministry for three years at North Mar Church in Warren, Ohio before departing with their two young children, Breaden and Madeline, for Amman, Jordan in 1999, where they served as international workers with the C&MA.

In Amman, Jordan they had two more children, Laytham and Tate. Ed became Field Director of the Arab Lands Field for the C&MA in 2004, providing leadership for the growing C&MA teams in Jordan, Lebanon, Iraq, and Syria. In 2010 Ed and his family returned to the United States to begin Ed’s Doctoral Studies at Asbury Theological Seminary.

From 2011-2015 Ed served as lead pastor at Deer Park Alliance Church in Red Deer, Alberta where the family enjoyed great blessing in ministry. Where living in Alberta, the Mangham’s took up skiing and snowboarding in the Canadian Rockies. Ed graduated with his Doctor of Ministry from Asbury Theological Seminary in 2015. That same year Ed was elected as the District Superintendent of the Ohio Valley District of the C&MA where he oversees 53 churches in Western Ohio and the State of Kentucky.

Ed and his family currently live in Wilmore, Kentucky where they enjoy the beauty of the state. They are all avid hikers while Julie enjoys rock climbing in Red River Gorge. Ed also plays Tennis and Golf as often as he can. Both Breaden and Madeline are in their third years at TFC, Breaden studying intercultural studies and Madeline studying nursing. Laytham will enter TFC in the Fall of 2020 after a gap year of travel and work.