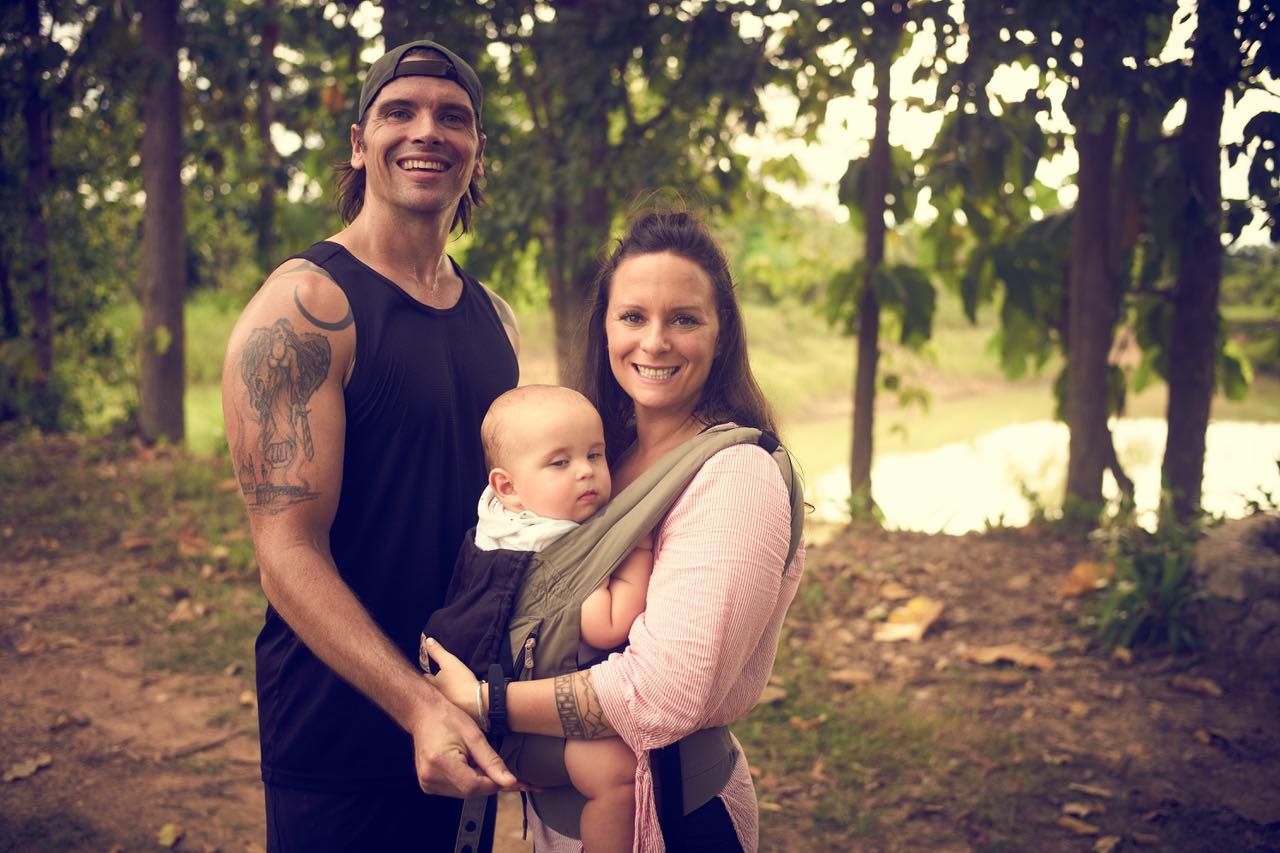 As the war in Ukraine proceeds through its second week, people around the world are refreshing their phones in dismay as events continue to unfold. For many, shock has been met with helplessness as Ukrainian men and women fight for their freedom while others are forced to flee to neighboring countries for refuge. Limited by geographical distance, many U.S. citizens have turned to prayer, speaking out in protest, or donating funds to organizations that are providing relief to the people of Ukraine. For most, these efforts are the extent of their means to help. For Sky and Noelle Barkley, their knowledge, training, and experience allow them to make a more direct impact.

In 2013, Noelle Sims, a student earning her degree in Cross-Cultural Studies at Toccoa Falls College, was walking down a sidewalk with a friend in Charlotte, North Carolina. They were looking for a place to stop and eat. Sky Barkley was working as a bouncer at the time and invited the ladies into the local nightclub for food. They declined the offer. However, Sky found himself in conversation with Noelle for 45 minutes as she shared about her studies at a faith-based institution and about her experiences following Jesus. After the conversation, they went their separate ways but maintained a connection through facebook.

At the time, Sky was struggling with his career. He was a former marine and, after enlisting at the age of 17, was stationed in Iraq’s Al Anbar province one year after the United States’ invasion of Iraq in 2003. After a car accident cut short his time with the Marines, he instead tried law enforcement, to no avail. Shortly following his conversation with Noelle, Sky, along with his brother, decided to go to South America. It was during this time that Sky surrendered his life to Christ and endeavored to find opportunities where he could use his knowledge and training to serve the Kingdom. While still in South America, he met a man from In Touch Ministries who introduced him to an organization called Free Burma Rangers. As he journeyed back to the States, he began to consider ways he could partner with them.

On the other side of the world, Noelle was completing her cross-cultural internship in Jordan. She and Sky maintained an acquaintanceship, sending each other messages of support through Facebook whenever they could. However, it wasn’t until they both returned to the States and met again over coffee that the relationship became something more. They married in 2014, Noelle graduated, and Sky decided to begin his undergraduate education at TFC. During this time, they served at a local wilderness residential program for teens in crisis and established their lives together.

Amid their newly married life, Sky and Noelle continued to explore the possibility of working with Free Burma Rangers (FBR). FBR is a non-profit, non-governmental organization based in Thailand that documents humanitarian rights violations, equips/trains ethnic relief teams, and provides front-line relief in Burma, Iraq, Syria, Tajikistan, Thailand, and Sudan. Between Noelle’s cross-cultural knowledge and Sky’s experience as a Marine and as an emergency medic, they were confident in their ability to be of use to FBR. They placed Sky’s education on hold and left for their first trip in 2016. They served as trainers for Indigenous people groups in Burma and wound up on a path that led them to a unique position to help the people oppressed by ISIS in Iraq. The job was grueling and difficult. Sky returned to a country that he had a complicated relationship with due to his career as a Marine. It was a place to which he had vowed to never return. Yet with a renewed spirit he had been able to not only forgive his enemies, but treat them with the love and compassion of Jesus.

In a video highlighting the work of FBR in Iraq, founder Dave Eubanks shared, “I don’t hate [ISIS], because they are human beings. They can change.” As they provide training, medical care, shelter, food, and clothing to oppressed peoples, FBR volunteers also uphold the Gospel message of hope, renewal, and reconciliation to Christ for the oppressors. Sky and Noelle participated in this mission for two years and returned to Georgia in 2018, allowing Sky to finish his studies.

While stateside, the Barkley’s continued to serve in as many ways as possible, often volunteering to provide aid to communities after natural disasters. In the fall of 2018, Sky led a team of TFC students to provide relief in Wilmington, North Carolina after Hurricane Florence. He and Noelle continued providing relief throughout the hurricane season, and Sky was able to graduate with his degree in May 2019.

As 2020 came to a close, the Barkley’s continued their work overseas with FBR, this time with an adorable baby boy tagging along. Sky and Noelle were blessed to welcome their son, Hawk, into the world in August of that year. Hawk has been able to join his parents in Iraq, Syria, and Thailand, as well as at their home base in South Carolina, where their sending and support agency, Here’s Hope Ministries, is located. Here’s Hope Ministries (HHM) provides opportunities for Christians to support oppressed peoples around the world through the means God has given them.

For many people, a partnership with HHM currently looks like gifting funds and actively praying for those in Ukraine and Russia. For Sky, it has meant hopping on a plane to Kyiv and joining a medical team that has rallied together to provide support to Ukrainian citizens. Much of this work has required adapting to the needs of those around them. They are helping coordinate rescues and evacuations–most of the time for orphans and the elderly– housing for Internally Displaced Peoples, coordinating relief shipments within the country, and conducting medical training.

For Noelle, it has meant partnering with her father to carry out the logistical aspects of their mission. This has included procuring trauma medical supplies, getting the supplies into the country, connecting personnel and volunteers with their team in Ukraine, receiving and distributing donations, streamlining evacuation requests, and pushing for social media awareness. For Hawk, it has meant posing for many cute photos for his mother to send to his father, and being along for the ride. He will join Noelle in traveling to Thailand for FBR meetings later this week.

On Tuesday, March 8th, the team in Ukraine was able to travel into Kyiv from their staging area in Lviv with three vehicles filled with medical supplies. On Wednesday, March 9th, they set up a clinic/casualty collection point in Kyiv ready to handle any injuries or casualties. Attacks are increasing in the capital, and the team is relying on God to lead the way. Beyond responding to the physical needs of Ukraine, they are present to share the Good News of Jesus with those around them. The team has group devotions every morning and are in constant prayer.

Noelle reflected upon the journey that she and her husband have been on over the past few years, sharing, “God has led us to many places together to share His Gospel in word and action. We have been on extended relief missions with FBR in Iraq, Syria, Burma, Thailand, and Tajikistan for Afghans. We have been on other relief missions to pull children out of sex-trafficking rings in Nepal and have helped oppressed Venezuelans in Colombia. [Now,] Sky is in Ukraine. Above all, we do our best to follow Jesus. It’s not perfect and it gets messy, but it’s fulfilling and aims to give God all the glory. Anything good we have ever done has been in step with the Holy Spirit’s guidance and love.”

If you are lucky enough to have the chance to speak with the Barkley’s, you will be met with an intense love and enthusiasm to help those in need, a deep reverence for the Gospel, and a humility that allows them both to love and forgive in the ways that Christ has called us to. We recognize that for many, service to the oppressed may not look the same as it does for them. Sky recognizes this, stating, “As Christians, moral neutrality is not an option when it comes to oppression… Some of us are given the ability to act, and some of us may only have the ability to speak out, but whether it’s action [or speaking out]… we have a moral obligation to respond.” As a community, we invite you to respond in multiple ways:

Spirit, intercede for us now when we don’t know what prayers to lift. Move across the land and hear the whispered petitions, the broken pleas for help, the deep sighs, and tears of grief. Be a companion to the lonely, a healing balm to the wounded, and wisdom to the enraged.

We recognize that we are your hands and feet, so empower us with your Spirit. Fill us with your loving character, so that we may be grieved by what grieves you. That we may pursue who you pursue and forgive who you forgive. Let us not be polluted by our prejudices or politics, but instead let us be transformed by your compassion.

We hate what is evil, and we cling to what is good. So to you, Father, we tighten our grip.

In Christ we find our greatest hope,