A Portrait of Dr. Kenneth Turner 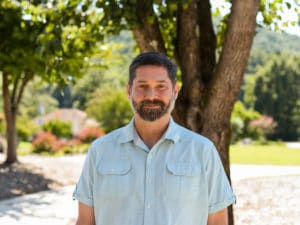 In the fall of 1995, Kenneth Turner was beginning his seminary education at the Southern Baptist Theological Seminary in Louisville, Kentucky. Arriving that same year was Dr. Daniel Block, a quirky, idiosyncratic Canadian-Mennonite who didn’t fit the mold of a typical Southern Baptist seminary professor. Turner, coming off of an undergraduate education in Physics and Math Education at Arizona State University, had found himself studying the Old Testament. He was drawn to the not-so-simple answers to difficult questions of God’s special revelation, Christian tradition, and ethical dilemmas. A cynic and skeptic at heart, Turner found inspiration in the work of Block, a world-renowned scholar in his own right and the true definition of the pastor-scholar.

“He just had this tenderness, this care for people. He helped me navigate complexities and realize I didn’t have to come to simple solutions and answers,” says Turner when reflecting on his time with Block in Louisville. Ken worked as his research assistant for 9 years, a job that consisted of grading, fill-in teaching, editing Block’s writings, chasing down resources and references, and even co-producing a booklet of top commentaries on each biblical book. During this time, Turner was also earning his M.Div. and PhD in Old Testament Theology, with his doctoral work in the book of Deuteronomy. When asked what drew him to the Old Testament Turner states, “Part of what makes Christianity real to me is that it recognizes a complex world, that we are complex creatures. They say it’s really hard to be an evangelical Old Testament scholar because, to be honest, with the text there’s some really difficult issues going on… It’s something that students and the church generally need to wrestle with, and I don’t like many of the answers that are more popular out there on how to settle some of these questions.” It was out of this honesty and desire for more that Turner became a professor. He explained, “I don’t know if I’d still be a Christian if I didn’t wrestle with these things. If I went the easy route, with simplistic answers to things, I think Christianity itself would seem unreal to me… I always wonder if God put me into teaching just to keep my own soul on track.” In the fall of 2006, Turner accepted his first full-time teaching position at Bryan College where he would remain for the next decade. It was there that he grew not only in his passion for teaching students, but also through inviting them into his own personal spiritual inquiries.

Dr. Turner arrived at Toccoa Falls College in the fall of 2016, the same semester as I did. I came to the Christian faith at the age of 16, and I came to TFC with the main, singular hope of learning how to understand and interpret the Bible. I sat in Dr. Turner’s Introduction to Old Testament class and was immediately disconcerted by his eccentric, non-cookie-cutter personality and theology. I brought to the classroom an expectation that I would be told what to believe, yet I found myself in his class frustrated with how perplexing the content was. More than just the difficulty of fitting the Old Testament into 15 weeks, Dr. Turner asked challenging questions regarding ethical issues and portions of the Bible that seem contradictory to itself or to widely accepted tradition. These were the questions that I had avoided studying for the first two years of my faith with an indifference driven by equal parts of laziness and feelings of inadequacy. Beyond the frustration of being forced to wrestle with these questions, Dr. Turner asked them and then offered no initial answers.

If you walk down the hall of the Bible and Theology Department at TFC, you will find a wide range of viewpoints when it comes to controversial questions of the faith. These views always exist within a commitment to Biblical truth and assume an evangelical view of inspiration and inerrancy. Yet within these parameters there is an openness that matches our faith, our calling, and the spirit of higher education. In light of TFC’s affiliation with the Christian and Missionary Alliance, our view of missions is holistic; we care for the whole person. The activity of the church—of doing gospel mission and caring for the widow and the orphan—never takes a backseat to the importance of doctrine. TFC cares deeply about good theology while at the same time allowing room for students to ask any and all difficult questions. The purpose is to equip the student to dig in further and study the topic for themselves. Professors participate in active dialogue about different perspectives and then allow students the right to form their theology even if it differs from their own. Our prevailing belief is that with the right tools and guard rails, students will be drawn to deeper faith and orthodoxy. We believe that studying well leads us to a faith that is true to the character of Jesus and the Scripture that he gave us.

Although I found myself frustrated with Dr. Turner that first semester, I began to realize the richness in his method of teaching. I started moving past the beliefs that I had inherited from those I looked up to in the faith and began to internalize my theology, which in turn made it all the more real and life-giving to me. I watched my professor ask difficult questions and come out on the other side a stronger, more faithful believer, and the truth of the Gospel became more real to me. This skeptical, peculiar professor became an example of perseverant study, a champion of the faith, and a humble theologian to learn from. Needless to say, I took many more of his classes.

When asked his hope for each of his students, Dr. Turner’s response was this:

“People ask, ‘What do you teach?’ and I always say, ‘I teach students.’ Really all of my classes become hermeneutics classes that are just being applied to different parts of the Bible. Because it’s my job in some ways to be the cheerleader, to say, ‘You should care about this. Even a book like Leviticus, you should care… This should be important to you.’ And once you have that commitment to study, what are the tools? What are the questions you should be asking and what are the ways you can go find the answers? The process is what I think is so important.”

It’s in this spirit that Dr. Turner’s most recent book was written. Coming off an 8-year project writing a highly academic, Hebrew-based commentary of Habakkuk for the Zondervan Exegetical Commentary on the Old Testament series (2021), he turned his attention to co-writing a book alongside Dr. Gregg Davidson, Chair and Professor of Geology and Geological Engineering at the University of Mississippi. Turner describes the book, titled The Manifold Beauty of Genesis 1 (Kregel, 2021), as a different approach to a worn-out topic, explaining, “We have all of these different views in Genesis 1, and believers have to wrestle with both the Bible and science.  [The debate] is not so much that people have different views, it’s the way they treat the people with different views. There’s this idea that only one view trumps all of the rest and that we can use that as a bludgeon to call into question somebody’s intelligence or their spirituality or their submission to the Bible. This book aims to move the discussion beyond the polarization of the topic to say, ‘Look, there’s a lot that we’re missing when it comes to what the text is saying about creation.’” The Manifold Beauty of Genesis 1 aims to teach readers much like Dr. Turner teaches his students at Toccoa Falls College. Turner and Davidson invite the audience to look at what the Scripture itself is teaching, see the idea and the overall message behind it, and equip readers with skills to develop their theology.

“Most of what we offer in the book, somebody could learn from and embrace regardless of their view of the age of the earth, their acceptance or denial of evolution, all of those questions. It kind of sidelines those questions, not because they’re irrelevant, but because they are secondary to what we think,” says Turner. “We’re writing for people who aren’t deeply committed on these issues. They just want to learn. Christians want to learn their Bible and see how the first chapter connects with the rest.” In short, the book goes beyond debates to a deeper understanding of God’s Word.

This project wasn’t initially Turner’s, though. “[Davidson] was the one who was working with the publisher and they said, ‘You need an Old Testament person to work with you,’ and so that’s when he called me,” Turner explains. The pair had known each other previously through a series of summer conferences where they worked on faith/science projects related to creation and evolution. This book deepened their friendship, with Davidson and Turner becoming a sounding board for one another. Davidson cut Turner’s chapters in half, removing most of the footnotes and hifalutin theological vocabulary, reminding Turner that not everyone thinks or uses terminology in that way. In turn, Turner helped Davidson hone his theological thinking.

It may come as a surprise to many that Turner and Davidson’s book is intended for high school and college-age students. Once again, Dr. Turner takes a difficult concept and pushes the younger generation to dig deeper into studying it. However, it doesn’t take long in a conversation with Turner to realize how close this age group is to his heart. Reflecting on his students, Turner says, “On one hand, this generation of students is the most biblically illiterate, partly because they haven’t been taught and partly because they don’t care. On the other hand, I see a lot of hope for this generation because they are not naturally bent to be in the old kind of left versus right way of thinking. They can see above it. They’re beyond having to just be traditional. This generation, if they take on the task and say it’s important, I think they could do a lot of good in ways that older generations have kind of lost their salt. The battle is there, and there’s a battle that needs to be done, but I have a lot of hope.” At the end of the day, Dr. Turner sees his task as to get students to enter into these kinds of discussions, and dialogue better than those who have come before us. He teaches students to understand the value of study, research, learning the language, understanding literary concepts, and to care about the small things that serve the Christian mission rather than detract from it. It is a difficult, daunting task. It would be much easier for him to sit in front of a classroom and tell students what to believe. Yet, as one of those students who has walked across a stage and shook his hand, with a diploma in the other, I could not be more grateful for his commitment to his work.